The case involving the missing but found Takoradi pregnant woman, Josephine Panyin Simson has taken a new twist following police investigations. A preliminary report as shared by Police indicated that three people suspected to have conspired with the victim who is now held as a suspect, in this case, have been arrested.

The arrest is to afford the police to unravel the mystery surrounding the supposed abduction and ‘abortion’ of the baby Josephine carried in her womb. Before the publication of the report by the Police, the family had raised serious doubts about claims that Josephine’s pregnancy was fake.

In the meantime, it is said that the first child of Josephine Panyin Simson was only introduced into her new marriage with Michael Simson. Along with this knowledge, the reactions of residents in Takoradi on various media networks had raised suspicions about the marriage and the entire case.

The following hypothetical issues have been thrown to the public and the police to guide investigations. These issues lend themselves to some incoherent or conflicting facts presented in the latest report by the police and interviews the mother and husband had granted to the media over the past three days.

1.     A medical report from European Hospital cited by the Police suggested the victim/suspect visited the facility in October 2020 but without any pregnancy. This was stated in item 5 (b) of the police report. Of what use is that statement when the family had reported that the pregnancy was 9-months-old? Unless the Police suspect the pregnancy and labour to be due in 12 months [irony] 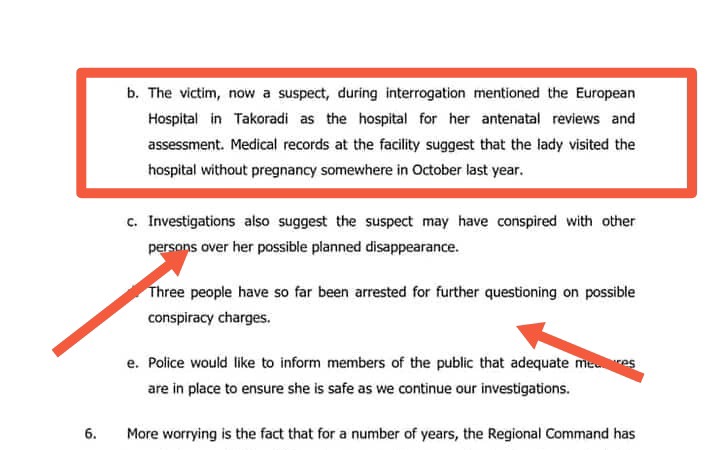 It appears the Police is not having sufficient information in their custody, as one would recall, that the Administrator of the European Hospital, Rev. Osei Boateng turned down an initial request to access the medical record of his patient until the needful is done. This report comes less than 24 hours when the hospital denied them access.

2.     Another pressing matter, in this case, is an account by the mother suspected that the victim/suspect carried with her the antenatal card the dawn she was allegedly kidnapped. In a TV3 interview, the mother Agnes Essel said the daughter had only relocated upon the request of the husband, to be supported as she was in her final trimester. It is said that the victim/suspect attended antenatal on her own.

But then, why did she carry her antenatal card with her that dawn [if it is true] when she was ‘kidnapped.’ Was she having any feeling of running into labour? Remember that this woman has a child and could tell if she is due.

3.     Several of her neighbours had given testimonies to confirm that she was pregnant, and was heavy before her reported ‘kidnap’. Videos and pictures have been shared to prove their claims. The mother also had shown samples of medications the daughter was taking for her pregnancy to prove her case too.

Some residents of Takoradi who spoke on radio think the victim/suspect might have fooled residents with a fake bump. But interviews that have been taken Takoradi-based Skyy Power FM, some elderly women, and other neighbours claimed to have touched the bump of the victim/suspect and confirmed it was real.