Dancehall artiste, Shatta Wale, has allegedly launched a complaint at the police station following scores of threats and verbal abuse from Blakk Rasta in recent times. One can recall that during the arrest of Shatta Wale over his shooting prank, the outspoken radio presenter accused him of abusing drugs. Blakk Rasta among countless trolls described Shatta Wale as a junkie who is leading the youths astray. “Junkie means someone who uses drugs and cannot stop. Normally, that’s the word we use for such people. But u can be a junkie of music or can be a junkie of work. “But generally is for someone who uses drugs and cannot stop.

I believe he (Shatta Wale) came out to say that he has stopped smoking. And just last month, if you watch the 1Don video, he was smoking. I don’t what he was smoking … he claimed he has stopped, but now he’s back to it. “Which means it is something he couldn’t stop himself from doing.

So he is a junkie of that thing. Someone, who claims he is 37 years. If you look closely at him, he looks like somebody who is 89 years. If it’s not true, tell me. Look at his face. I know because I have seen your (Shatta Wale) birth certificate and passport that says you (Shatta Wale) are 41 years as it stands right now,” Blakk Rasta stated during an interview with Media General’s Akoma FM. But it appears the Shatta Movement boss who has been closely monitoring events after he was released from jail has taken an action against Blakk Rasta.

In a post made by the outspoken media personality via Twitter today, Tuesday, November 11, 2021, he disclosed that the dancehall artiste had reported him to the police authorities. Blakk Rasta called out Shatta Wale for refusing to show up at the police station after reporting him. “Shatta Wale, charlie the police you go report me. I go saa you no dey come. You pull out anaa? I dey busy nor. Make we finish what you start!” he wrote on Twitter. Shatta on the other hand is yet to respond to Blakk Rasta’s statements. 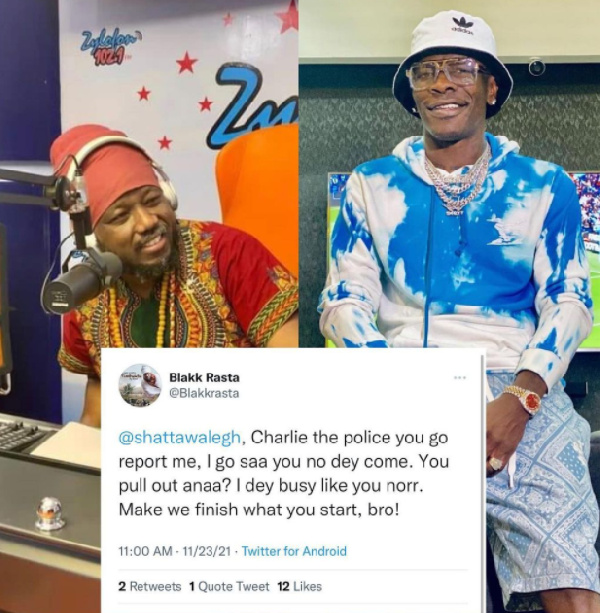 Dr. Papa Kwesi Ndoum celebrates as he has been exonerated

Sky train promise: It is not possible to do so - John Peter Amewu