The Police Service has denied reports that officers were dispatched to arrest Madina MP Francis Xavier Sosu while he was at church today.

According to the Police, the plained-clothed officers who may have been seen at the MP’s church were there to gather intelligence and not to arrest him.

In a statement, the Police said the lawmaker has been invited to assist in investigations over an illegal road blockade during a protest over bad roads in the area last Tuesday. 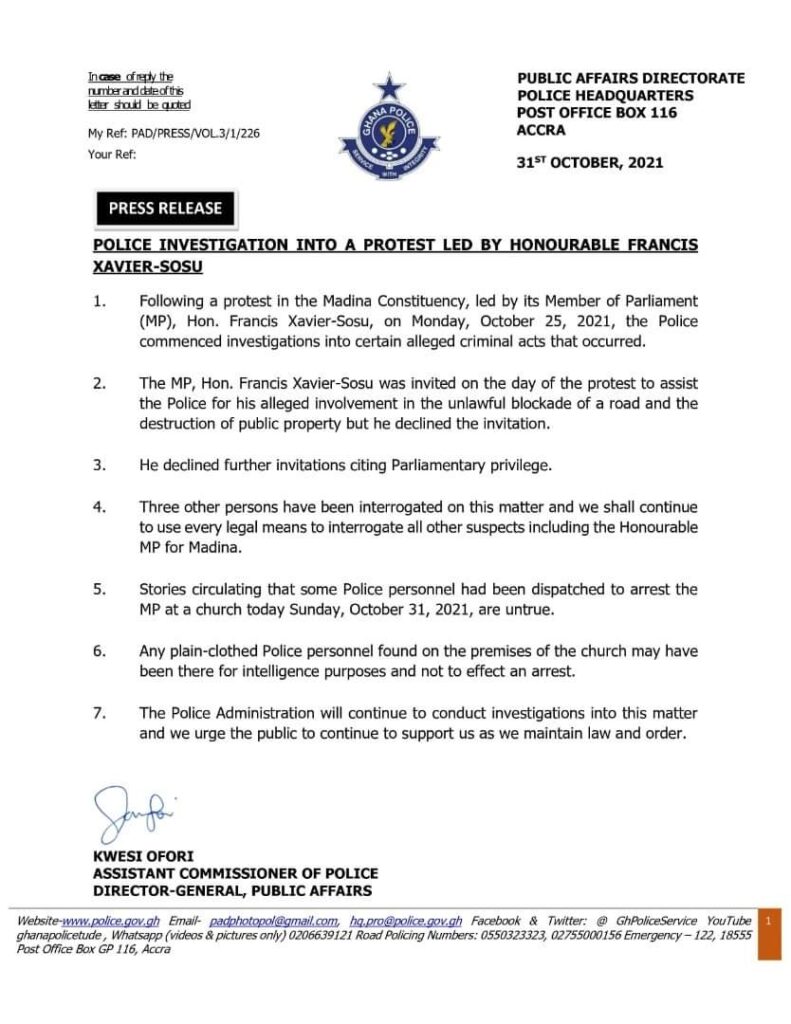 The Speaker of Parliament, Alban Bagbin in responding to the complaint from the Madina MP referred the matter to the Privileges Committee for a thorough investigation to be conducted.

“At the end of the day, it is the House that will determine whether the complaint and the report with whatever evidence gathered really did constitute contempt of Parliament. The committee will investigate the complaint and will submit a report to the house for the whole consideration of the matter,” Alban Bagbin stated.

Meanwhile, the Member of Parliament for Ningo Prampram, Sam Nartey George has questioned the presence of the National Security Operatives and Police Personnel at the Church premises of his colleague MP.

“So why is the Ghana Police Service disregarding a directive from the Rt. Honourable Speaker of Parliament on the intention to arrest the Honourable MP for Madina, Lawyer Francis-Xavier Sosu?” he wrote on his Facebook wall.

He continued “Who are the Police Officers at the Church premises at Ritz Junction in Madina seeking to arrest the MP? Is the IGP aware of this order and what it means in the face of Mr. Speaker’s directives?”

Mr. Nartey George has also sent a word of caution to the Police Administration that Parliament would respond in equal measure if they fail to respect the orders of the Speaker of Parliament.

“Well we can assure the IGP and the Police Officers involved that the full might of Parliament’s Privileges Committee would be brought to bear on their actions if they want a showdown. Enough of the disrespect for Parliament. The Constitution is clear on the processes to arrest a sitting Member of Parliament.

“We would respond in full measure and drastically! That is a promise!” he reiterated.

Do you have a story to share? Send your stories to the editor at radiomarinaf@gmail.com or WhatsApp number 0752 494221