More than one million people have signed a petition calling for people who racially abuse footballers to be banned from grounds for life.

Three black England players were racially abused online after they missed penalties in a shootout against Italy in Sunday’s Euro 2020 final.

Marcus Rashford, Bukayo Saka and Jadon Sancho were targeted after the Three Lions suffered a heartbreaking defeat at Wembley.

Now over a million people have urged the government and football authorities to go further and introduce automatic lifetime bans for people who racially abuse players. 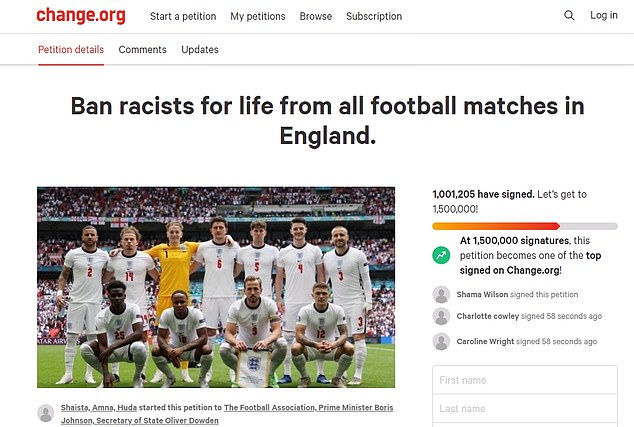 The petition, entitled ‘Ban racists for life from all football matches in England’, was set up by anti-racism campaigner Shaista Aziz and her friends under the name of the Three Hijabis.

The change.org petition reads: ‘As multi-racial football fans, we finally feel represented by this anti-racist and inclusive England team.

‘We could not be more proud or inspired by our magnificent team and by their talent, bravery, leadership and love for all.

‘Gareth Southgate’s England team plays for ALL of us. Their vision is an inclusive vision and this matters more than EVER – it’s why we feel proud of this team and why they’re so cherished and loved by many of us.

‘There should be no room for racists and bigotry in football or society.’

Maradona: Medical staff to be tried for football legend’s death