Kanye West has posted another bizarre poem in which he wrote that he was murdered and even references Kim Kardashian owning the family home amid their divorce.

The 44-year-old rapper took to Instagram on Tuesday morning to share his latest piece of writing which was titled DEAD. In it he references many of his recent struggles which left him deceased but did not realize it until now.

At one point he appears to reference his 41-year-old estranged wife keeping the $60million Hidden Hills estate they once shared as he wrote: ‘My kids would dance for me in a home I once led.’

It was reported that the two had negotiated a buyout price over the mansion back in October as their divorce process has rolled on.

The poem began: ‘No one wanted to tell me I was DEAD / And only people that would talk to me were in my head.

READ THE POEM BELOW: 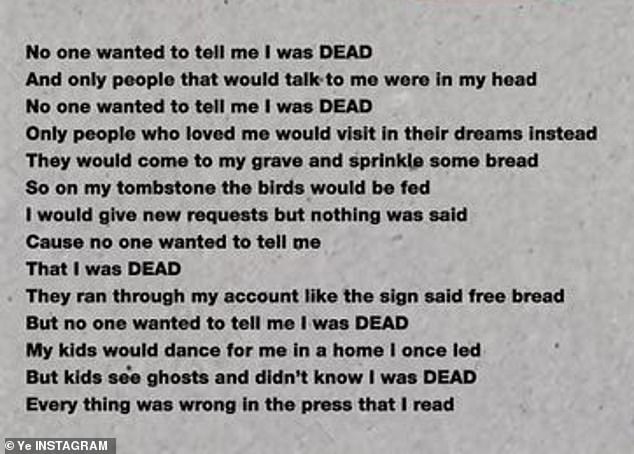 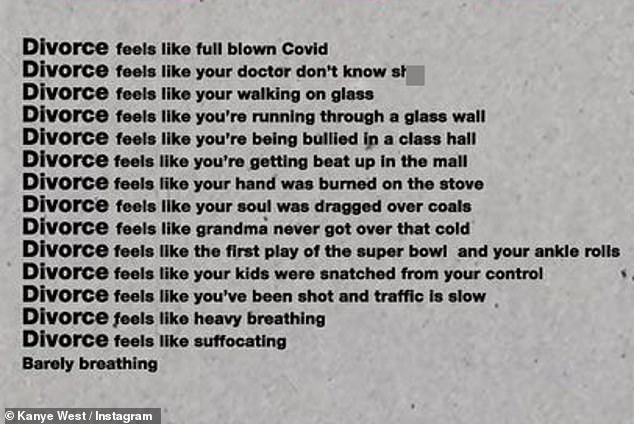 Toward the end of the poem it was revealed that Ye’s cause of death was a bloody murder as he came to terms with his death.

He wrote:  ‘I found out one day at the newsstand purgatory there was a front page article of my murders story.’

The identity of his murderer is never revealed in the poem but he wants to leave it all up for interpretation.

The artist – who has been in hot water as of late for his disturbing music video that appeared to simulate SNL star Pete Davidson getting buried alive – defended his art in the accompanying caption.

Kanye  received sympathy from his followers.

‘We’re sorry bro. Praying for all of y’all,’ someone commented, while another said: ‘God got you brother. Prayer is strong and we praying. The other side is bright. Sending my love.’

It was also liked by supermodel Naomi Campbell.

Kanye’s post also likened divorce to feeling as though ‘your kids were snatched from your control’ and as though ‘you’ve been shot and traffic is slow.’

It has been an eventful few days for the artist as he recently took aim at Kim’s new boyfriend Pete Davidson.

On Wednesday, Kanye’s music video Easy showed the rapper burying a replica of Pete and decapitating him in shocking footage, days after ex-wife Kim was declared ‘legally single’ by a judge.

West, who collaborated with The Game on the track, rapped: ‘God saved me from the crash, just so I can beat Pete Davidson’s a**.’

In the clay-animated clip, Kanye kidnapped Pete in the video and threw a bag over his head before tying him up and throwing him on the back of an all-terrain vehicle.

Kanye ended the clip with a direct message to the Saturday Night Live star: ‘Everyone lived happily ever after, except Skete’ before crossing out the name and writing ‘you know who.’

‘We havin’ the best divorce ever,’ he rapped in the song. ‘If we go to court, we’ll go to court together. Matter of fact, pick up your sis, we’ll go to Kourt’s together. I watched four kids for like five hours today.

‘I wear these Yeezy boots everywhere, even in the shower today. I got love for the nannies, but real family is better. The cameras watch the kids, y’all stop takin’ the credit.’

Meanwhile, Kim has received a flood of support after restoring her maiden name and dropping last name ‘West’ from her social media.

On Wednesday, a Los Angeles judge granted her request to to become legally single while issues of child custody and property are worked out.

Judge Steve Cochran granted her request to have her maiden name restored, and he denied West’s motion to prevent Kardashian from transferring assets out of trusts set up during the marriage.

The feuding couple, both billionaires, had their high powered attorneys in court Wednesday: Laura Wasser for Kardashian and Samantha Spector for West. Spector was only appointed last night after West fired his previous lawyer.

Kardashian’s new legal status means that West is also legally single, and a source close to the rapper claimed that he also wants the divorce to proceed, though that doesn’t align with his delay tactics in court or his public statements about trying to get his wife back.

She filed for divorce in February 2021 and the couple initially seemed to be on the same page, but in recent weeks West has taken to attacking her boyfriend Pete Davidson on social media.

He has also repeatedly posted text conversations that appear to be with his estranged wife, including one conversation in which she appeared to write, ‘Why can’t you keep any of our conversations private ???’

‘Cause I got a text from my favorite person in the world,’ he allegedly replied. ‘I’m your number one fan. Why wouldn’t I tell everyone!!!!’