The former VP captured the 20 electoral votes from the crunch state – propelling him into the White House as the 46th President of the United States.

Biden fought back a deficit in several battleground states riding a huge wave in mail-in ballots which Trump branded “fraudulent” and repeatedly demanded counting be stopped.

The Republican firebrand accused his opponent of trying to “steal the election” after declaring victory prematurely on election night.

But just a few hours later the president woke up to discover his lead in several key states had been wiped out by a blue surge that gathered pace over the following days as the ballots were counted.

Biden took the lead in battleground states Georgia and Pennsylvania on Friday – which inched him closer to the Oval Office.

Last night, Biden gave a presidential-style speech from Delaware asking people to be more “civil with one another” amid ugly scenes with protesters clashing and gun-wielding mobs storming vote counts.

The Democrat said: “We may be opponents, but we’re not enemies. We’re Americans.

“We don’t have any more time to waste on partisan warfare.”

Trump had repeatedly urged his supporters to vote in person and his base has tended to be more bullish in the face of coronavirus.

But Biden’s backers were more cautious and many opted to send their ballots in the post, causing the late surge. 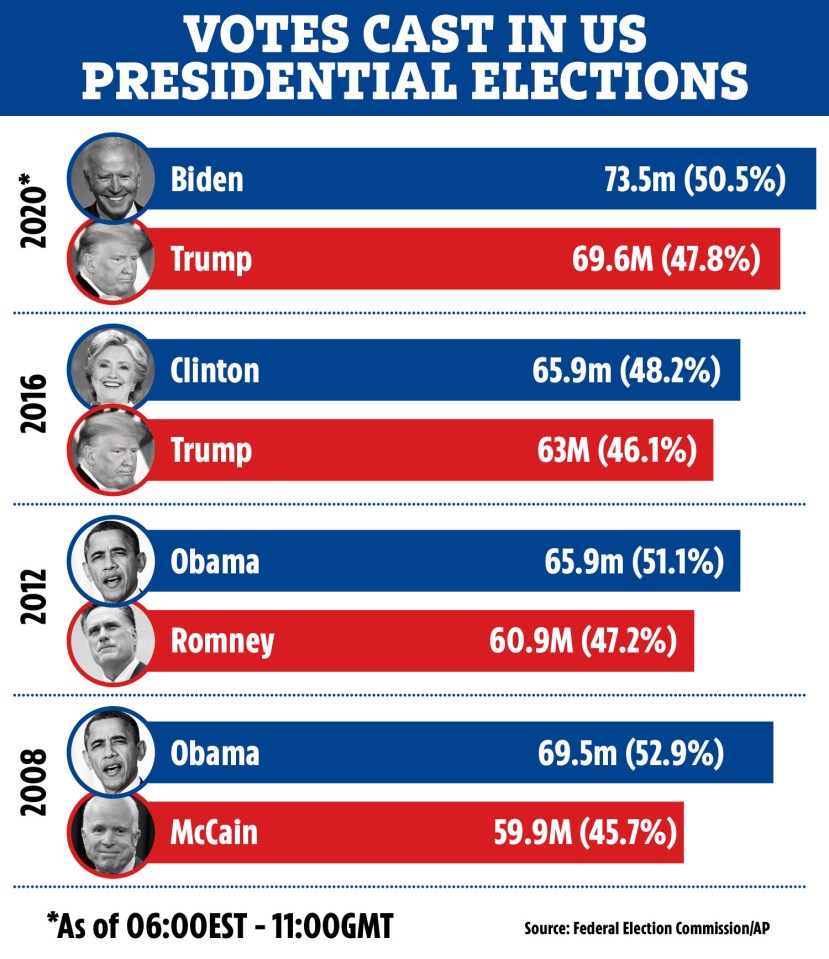 Trump sensationally accused Biden’s campaign of carrying out a “fraud on the American public”, but failed to offer evidence for his claims.

According to CNN journalist Jim Acosta, a campaign insider admitted the President’s team has “nothing concrete” to back up their claims of “fraud.”

Trump launched a barrage of lawsuits in key states to challenge the results forcing Georgia into a recount after Biden had wrestled back a slender lead.

But in the end it wasn’t enough for the President and the Democrat challenger was able to get across the line.

Biden seemed confident of victory throughout the nail-biting race, which dragged on for days as postal ballots continued to be received and counted.

But unlike his rival he held back from declaring himself the winner, saying only that he believed he would emerge victorious “when the count is finished”.

On Thursday, as Biden dramatically reversed Trump’s gains in Nevada, Georgia and Pennsylvania, fans chanted “President Biden” as he entered his campaign HQ.

The president-elect made history after securing the most votes of any presidential candidate ever, smashing Barack Obama’s 2008 record.