Jose’s back… just a week after the sack!

Jose Mourinho has admitted he is ‘missing football already’ after finding work just days after his sacking from Tottenham as the Portuguese coach takes up a broadcasting role with radio station talkSPORT.

The 58-year-old was relieved of his duties by Spurs chief Daniel Levy last week, just days before the club’s appearance in the Carabao Cup final, having overseen an underwhelming campaign.

The north Londoners were dumped out of the Europa League by Dinamo Zagreb under Mourinho’s watch and are unlikely outsiders to clinch a place in the top four, missing out on Champions League football for a second successive season.

Mourinho pocketed £20m in compensation following his exit, and has taken up a new role with talkSPORT, with the radio station announcing his signing on Friday morning.

And his arrival was unveiled by Alan Brazil on the breakfast show on Friday morning, with the Portuguese taking up punditry duties for this summer’s Euros.

In a clip posted to the broadcaster’s Twitter page, Mourinho said: ‘I’m not working for a week and I’m missing it already.’

The broadcaster teased Mourinho’s arrival on Thursday night, tweeting a video of a mysterious figure arriving at talkSPORT headquarters with the caption: ‘We’ve got something “special” for you. Join us at 8am.’

Ryan Mason has taken over on an interim basis and was unable to win the club’s first piece of silverware since 2008 as Spurs fell to a 1-0 defeat to Manchester City at Wembley. 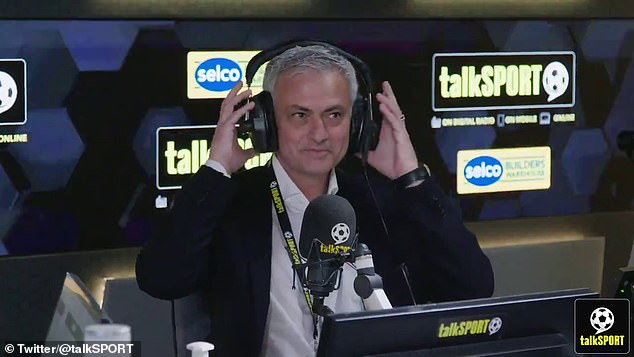 Ajax boss Erik ten Hag is a frontrunner for the Spurs hotseat, while super-agent Jorge Mendes is reportedly pushing Wolves boss Nuno Espirito Santo in the club’s direction. Leicester City boss Brendan Rodgers is understood to have snubbed Levy’s advances to take over.

Levy described Mourinho as ‘a true professional’ following his sacking, ending the Portuguese’s 17-month stay with the club after taking over from Mauricio Pochettino in November 2019.

‘Jose and his coaching staff have been with us through some of our most challenging times as a Club,’ the Spurs chairman said.

‘Jose is a true professional who showed enormous resilience during the pandemic. On a personal level I have enjoyed working with him and regret that things have not worked out as we both had envisaged.

‘He will always be welcome here and we should like to thank him and his coaching staff for their contribution.’

John Mahama depicts what N.D.C. will do to monitor the 2024 elections