Trump received widespread criticism for holding a ‘peaceful protest’ at the White House on Saturday where he spoke to a large group of supporters gathered on the South Lawn.

He defended the move during his 30-minute interview on Sunday.

‘There is no spread. And there wasn’t yesterday either,’ Trump told Bartiromo.

‘And, by the way, I don’t know if you noticed, I was on a balcony,’ he said in reference to making his remarks from the south portico. ‘The closest person was probably a couple of hundred feet away. And they were down on grass. There was nobody even close to me yesterday.’

‘Even yesterday, I knew I was free,’ he added. ‘I beat this crazy, horrible China virus. And it also gives you immunity. I mean, it does give you immunity.’

Trump’s top physician Dr. Sean Conley said Saturday night that the president is no longer at risk of transmitting coronavirus. He did not say explicitly at the time whether Trump had yielded negative test results for COVID-19.

Last week, Conley revealed the president has tested positive for antibodies for the virus.

In a memo released on Saturday night, the White House physician said Trump meets the Centers for Disease Control and Prevention criteria for safely discontinuing isolation.

The president cleared the air Sunday since Conley’s note did not say whether Trump still has coronavirus. Bartiromo asked if the statement means he has tested negative for the virus.

‘But I’m immune. So, the president is in very good shape to fight the battles,’ he said.

Conley’s diagnosis comes as the president prepares to resume campaign rallies and other activities – starting Saturday when he held a ‘peaceful protest’ at the White House. 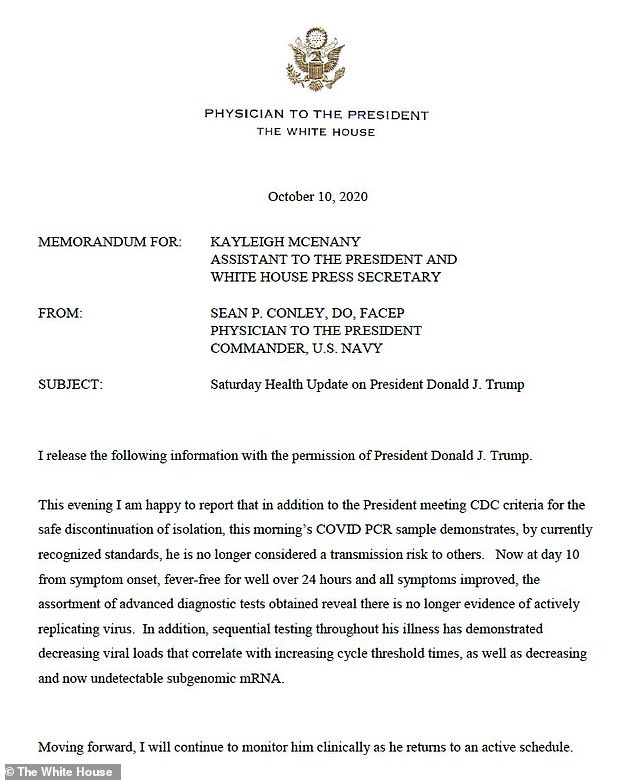 Some medical experts had been skeptical that Trump could be declared free of the risk of transmitting the virus so early in the course of his illness. Just 10 days since an initial diagnosis of infection, there was no way to know for certain that someone was no longer contagious, they said.

The memo followed Trump´s first public appearance since returning to the White House after being treated for the coronavirus. Hundreds of people gathered Saturday afternoon on the South Lawn for a Trump address on his support for law enforcement from a White House balcony.

Trump took off a mask moments after he emerged on the balcony to address the crowd on the lawn below, his first step back onto the public stage with just more than three weeks to go until Election Day. He flouted, once more, the safety recommendations of his own government just days after acknowledging that he was on the brink of ‘bad things’ from the virus and claiming that his bout with the illness brought him a better understanding of it.

His return was a brief one. With bandages visible on his hands, likely from an intravenous injection, Trump spoke for 18 minutes, far less than at his normal hour-plus rallies.

He appeared healthy, if perhaps a little hoarse, as he delivered what was, for all intents and purposes, a short version of his campaign speech despite the executive mansion setting.

With this information released by the E.C. does it mean that there is the possibility of disqualifying some presidential aspirants ?

The  Spiritual Christian is the one that is excellent in the knowledge and application of God's Word.- Arcbishop Dr. Bishop Agyemang Badu