Guinea: What CDD’s Afrobarometer survey found before the elections

A survey conducted before Guinea’s last presidential election showed that Guineans strongly prefer democracy to any other regime but want
the president limited to two terms.

The survey conducted by the Centre for Democratic Development (CDD), Afrobarometer and Stat View International (SVI) indicated that despite widespread dissatisfaction with the government’s performance, Guineans strongly prefer democracy to any alternative form of governance, the most recent Afrobarometer survey showed. 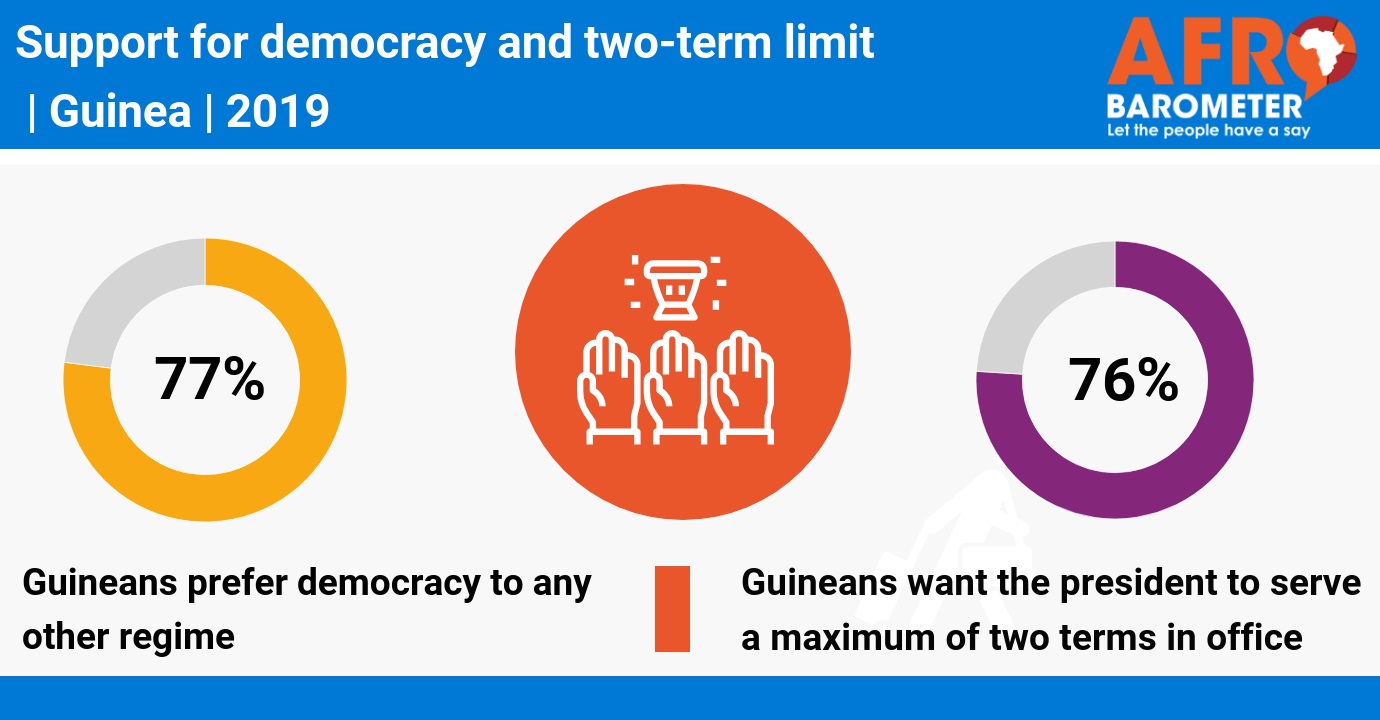 Barely a year after claiming a third term in office amidst widespread opposition, President Alpha Condé has been detained since a coup d’état last Sunday.

Afrobarometer findings from late 2019 show majorities of Guineans believe that the country is heading in the wrong direction, that the level of corruption has increased, and that the government is doing a poor job of fighting corruption.

Dissatisfaction with the country’s economic conditions and citizens’ personal living conditions has increased, as have negative ratings of the government’s economic performance and provision of essential public services.

Only three in 10 citizens are satisfied with the way their democracy is working.

But the study also shows that most Guineans endorse elections as the best way to choose leaders and that citizens’ preference for democracy has  remained consistently high over the years.

– A similar majority (76%) want the president to serve a maximum of two terms in office.

– Almost two-thirds (63%) of citizens say the level of corruption in the country increased during the year preceding the survey, a 25-percentage-point increase compared to 2015 (38%).

Afrobarometer is a non-partisan African survey research network that provides reliable data on citizens’ experiences and evaluations of democracy, governance, and quality of life.Eight rounds of surveys have been completed in up to 39 countries since 1999.

Round 8 surveys (2019/2021) cover 34 countries. Afrobarometer’s national partners in all regions of Africa conduct face-to-face interviews in the language of the respondent’s choice.

In the most recent survey in Guinea, Stat View International interviewed a nationally representative, random, stratified probability sample of 1,200 adult Guineans in NovemberDecember 2019. A sample of this size yields country-level results with a margin of error of +/-3 percentage points at a 95% confidence level.