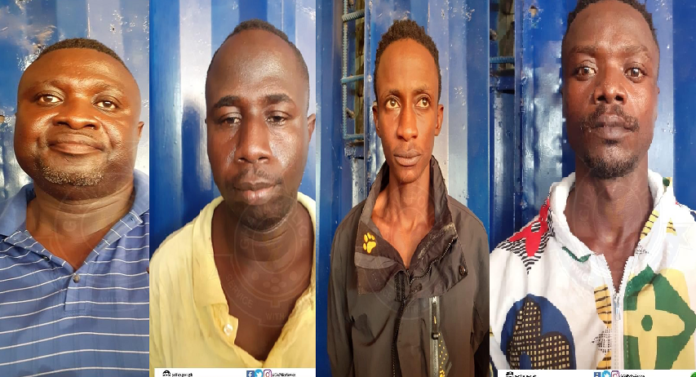 The Police during a special intelligence-led operation, have arrested four robbery suspects who broke into the residence of their victims at Ajasco Red Top, Kokrobite, and made away with their personal effects on Thursday, November 18, 2021.

The suspects, Benjamin Otoo alias Dada Joe, Tony Mensah Yedu alias Big Joe, Bismark Asabree alias Dagbano and Nana Yaw Arko, reportedly broke into their victims’ residence and forcibly made away with their three laptops, an iPhone 8 plus, three infinix smartphones and Techno Cammon 7. Others were 1 Bluetooth speaker, an extension board, 3 phone chargers, 2 laptop chargers together with an unspecified amount of money.

The Police in a statement said upon receipt of the robbery report, the Weija Police Command embarked on a special 8-hour covert operation which led to the arrest of Benjamin Otoo, Tony Mensah Yedu and Bismark Asabree at their hideouts at Ajasco Red Top and New Aplaku on Saturday, November 20, 2021.

Suspect, Bismark Asabree later led the Police to arrest suspect Nana Yaw Arko, from his hideout at Labadi. A search on them led to the retrieval of 20 assorted phones, a taxi cab, 3 laptops, 1 motorbike, 1 locally manufactured pistol, a Police vest, 1 Gota and 14 assorted wristwatches.

The police added that all four suspects will be arraigned on Monday, November 22 2021.

Meanwhile, efforts are underway to get other accomplices arrested to face criminal charges.

Roads Ministry clarifies the suspension of road tolls in the country