Four ministerial nominees to be disapproved by the Appointments Committee

Four ministerial nominees are set to be disapproved by the Appointments Committee due to possible perjury regarding the Frontiers Healthcare Solution Services contract. 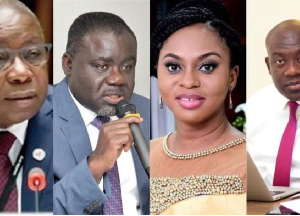 The Minority MPs on the Appointments Committee say they will do everything possible to vote against the approval of Kwaku Agyeman-Manu, Kojo Oppong-Nkrumah, Sarah Adwoa Safo and Kwaku Ofori Asiamah for their deliberate hiding of critical information on the contract awarded to Frontiers Healthcare Solution Services to undertake COVID-19 testing at the Kotoka International Airport.

“What we have witnessed at the ongoing proceedings of the Appointments Committee is a shocking spectacle of lack of accountability, responsibility, outright disregard for our laws and utter disrespect for the people of this country,” Samuel Okudzeto Ablakwa (NDC- North Tongu), who has been consistent in asking the details of the contract from the nominees told Joy News Thursday, monitored by GhanaWeb.

“It is totally unconscionable that when people are dying and when there is a pandemic, a cabal will emerge and their only interest is profiteering.”

The NDC MPs believe that the nominees refused to speak to the details relating to the controversial contract when they appeared before the Appointments Committee as part of their vetting, even though they were related to the matter at some point when the contract was being awarded.

He added, “This will play a significant part in our considerations, particularly, ministers who had direct responsibility for health, [and] procurement, for maintaining the compliance and safety standards. So, you can be assured that it will be a crucial factor when we take a vote.”

Okudzeto Ablakwa hinted that the NDC caucus in Parliament will move a motion when parliament resumes, “for a full scale bipartisan parliamentary enquiry into the scandal”.

“It has all the signs of blatant thievery, corruption and outright disregard for our laws,” he stressed.

When asked if indeed the MPs were not aware of the Frontiers contract, Samuel Okudzeto Ablakwa stated categorically that the Transport Minister nominee presented to the Appointments Committee some “wishy-washy” contract which appeared largely to focus on granting of space to the Frontiers Healthcare Solution Services by the Ghana Airports Company Limited.

“You can […] rest assured these are matters that will engage our attention seriously when we come to take a vote on these nominees who have been less than candid and who have not been forthright and who have tried to get away and actually shown an utter disregard for our laws.”

Fix your elections rather than offer us lecture’s. Uganda Govt. to U.S.A

Fix your elections rather than offer us lecture's. Uganda Govt. to U.S.A

My client will sin no more- Dominic Ayini's Lawyer