City under siege: Photos from inside Kyiv show bombed out schools, decimated homes and dead soldiers lying in the streets of the Ukrainian capital

Harrowing images from inside Kyiv have emerged showing terrified citizens gathering in underground shelters after residential buildings were bombed out in shelling as Russian forces pressed their advance and authorities said they were girding for an assault aimed at overthrowing the government.

Ukrainian forces were pictured taking up defensive positions across key streets in Kyiv as they prepared to to battle Russian troops for control of the capital of three million people even as air raid sirens wailed over the city.

A senior official troops were defending positions on four fronts despite being outnumbered after residents scrambled to take cover in basements, metro stations and bomb shelters across the capital following a televised warning of air strikes.

Meanwhile residents were pictured surveying the damage to their home, near Kyiv’s main airport, after the 10-storey apartment block’s windows were blasted out and a two-metre crater filled with rubble formed, showing where the shell had struck before dawn.

Corpses of two Russian servicemen who had dressed in military fatigues in an apparent bid to sneak into the Ukrainian capital were pictured strewn next to an unmarked armoured vehicle after they were killed in a skirmish with Kyiv’s forces early this morning.

Ukrainian officials said a Russian aircraft had been shot down and crashed into a building in Kyiv overnight, setting it ablaze and injuring eight people.

The Kyiv city council warned residents of the city’s Obolon district, near Gostomel, to stay indoors because of ‘the approach of active hostilities’ after gunfire was heard in the suburb, as well as the districts of Vorzel, Bucha and Irpen, this morning as Putin’s men advanced from Chernobyl, less than 60 miles outside the capital.

Ukraine’s ministry of defence today took to social media to urge residents in Kyiv to make Molotov cocktails to ‘repel the occupiers’ and for citizens in Obolon to share information with Ukrainian military about the movement of Russian vehicles and troops.

Soldiers in the capital established defensive positions at bridges, and armoured vehicles rolled down the streets, while many residents stood uneasily in doorways of their apartment buildings.

Hundreds of people were crowded into a cramped bomb shelter beneath a building in central Kyiv early Friday afternoon after a televised warning of air strikes.

‘We don’t know how long we have to stay here. Good we have chairs at least,’ said Viktoria, 35, while her kids of 5 and 7 slept without taking off their winter coats. ‘We’re shocked… How can you wage a war against peaceful people?’

Alla, 40 said: ‘The kids were scared, they were crying and asking ‘Mom, will we all die?” 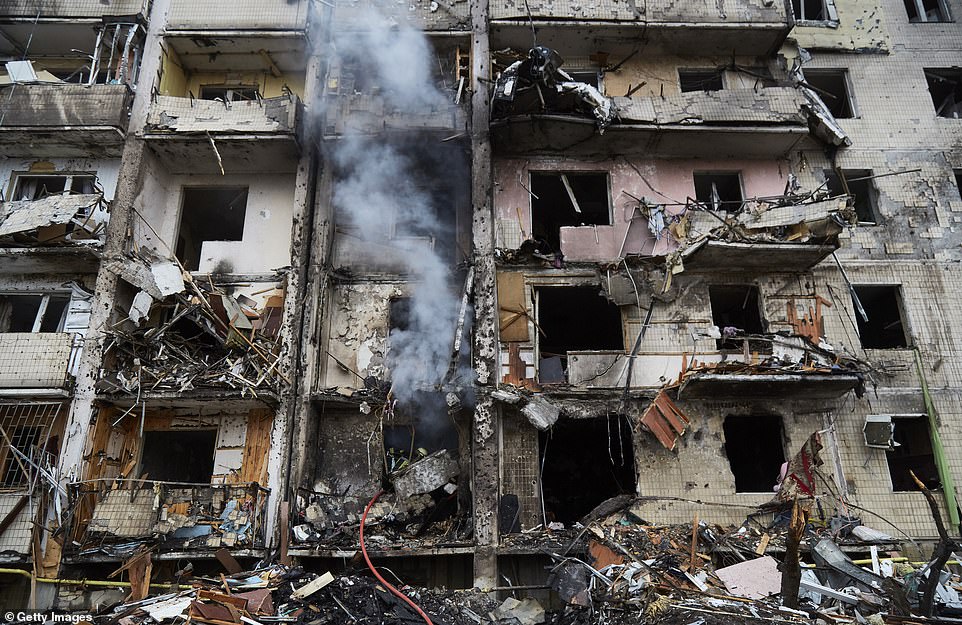 “I just want to make it clear, those on social media, those who are following that news. I did not say that -Afenyo-Markin

“I just want to make it clear, those on social media, those who are following that news. I did not say that -Afenyo-Markin