Father Baltharzzar Obeng Larbi (Venerable), the Anglican Priest caught in video kissing three(3) female students at St. Monica’s College of Education at Asante-Mampong has apologized to the general public for the unfortunate incident.

According to him this unfortunate incident happened during a Church Service in appreciation of the Level 300 students, who would be going for their Macro Teaching(Off-Campus Teaching Practice) when College resumed the next academic year, by the College’s Chaplaincy Board.

“The three students seen in the video performed extraordinarily well and were therefore called to be appreciated by the Chaplain. An attempt to add human touch resulted in the scene in the video,” he expalined in a statement signed by him.

“Accordingly, I am sincerely sorry for my actions seen in the video. I seemed to have taken a number of things for granted. I did not think my behaviour through and I admit that the act and its setting are wrong even in the absence of Covid-19.”

“I sincerely apologies to my Archbishop, the entirety of the Anglican Communion, the College, the affected students and their families, and the generality of the public,” he added.

He prays for forgiveness from all and sundry and plead that Ghanaians hold him in their prayers during this trying times. 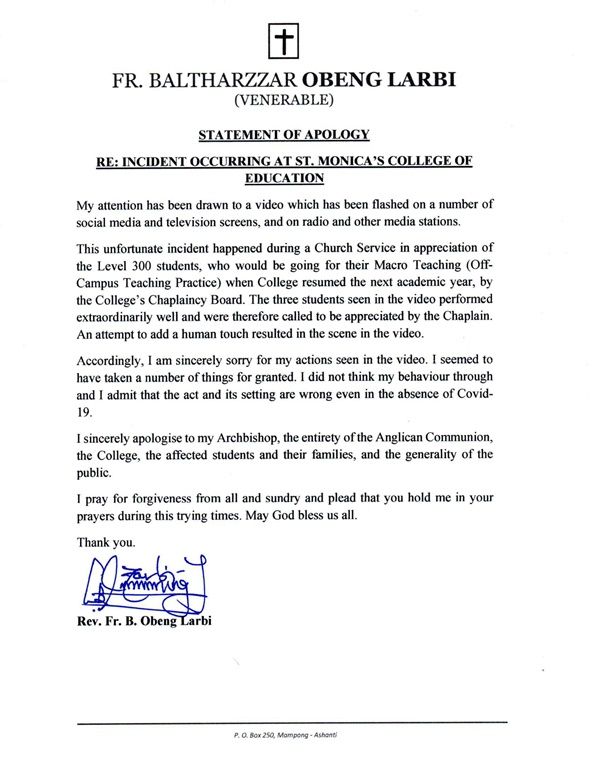