Uefa 2020 team of the year revealed with just two Prem stars, Messi as No10 and Ronaldo on wing in ultra-attacking XI

ONLY two Premier League stars made it into the Uefa 2020 team of the year with Lionel Messi playing as a No10 and Cristiano Ronaldo on the wing.

The side – voted for by fans – is an ultra-attacking XI with both Messi and GOAT rival Cristiano Ronaldo in slightly unfamiliar roles.

Barcelona skipper Messi, usually seen through the middle or on the right side of the forward line, finds himself slightly deeper as a No10 in a 4-2-3-1 system.

The two central midfielders are Manchester City’s Kevin De Bruyne and Thiago – who joined Liverpool in the summer but was part of Bayern Munich’s Champions League winning squad last season and therefore does not add to the Prem quota.

Ronaldo is out on the right wing as opposed to playing as a central striker like he does so successfully for Juventus – he leads the Serie A Golden Boot standings with 15 goals in 14 games this season.

The Portuguese superstar is no stranger to playing out wide having excelled earlier in his career on the right for Manchester United.

Bayern’s Robert Lewandowski is the man elected to lead the line and few could argue after a stunning 2020 saw him bag 55 goals in just 47 matches.

The Pole reminded fans of how successful he was by posing with the TWELVE trophies he bagged in the last 12 months on New Year’s Eve.

Liverpool’s talismanic defender Virgil Van Dijk is the other Prem star selected after the Dutch ace helped lead the Reds to a first league title in 30 years.

He is partnered in the heart of defence by Real Madrid skipper Sergio Ramos while Bayern provide both full-backs as well as Manuel Neuer in goal.

Normally a defensive midfielder, Joshua Kimmich is another star playing out of position after filling in expertly at right-back for the Germans after injuries.

And Alphonso Davies takes the left-back slot to become the first Canadian named in a fans’ team of the year.

Ronaldo has featured in every single side since 2007 and makes the cut for the 15th time while Messi was selected for the 12th occasion.

Fans voted from a 50-strong shortlist that was compiled based on players’ performances in Uefa and domestic competitions in 2020. 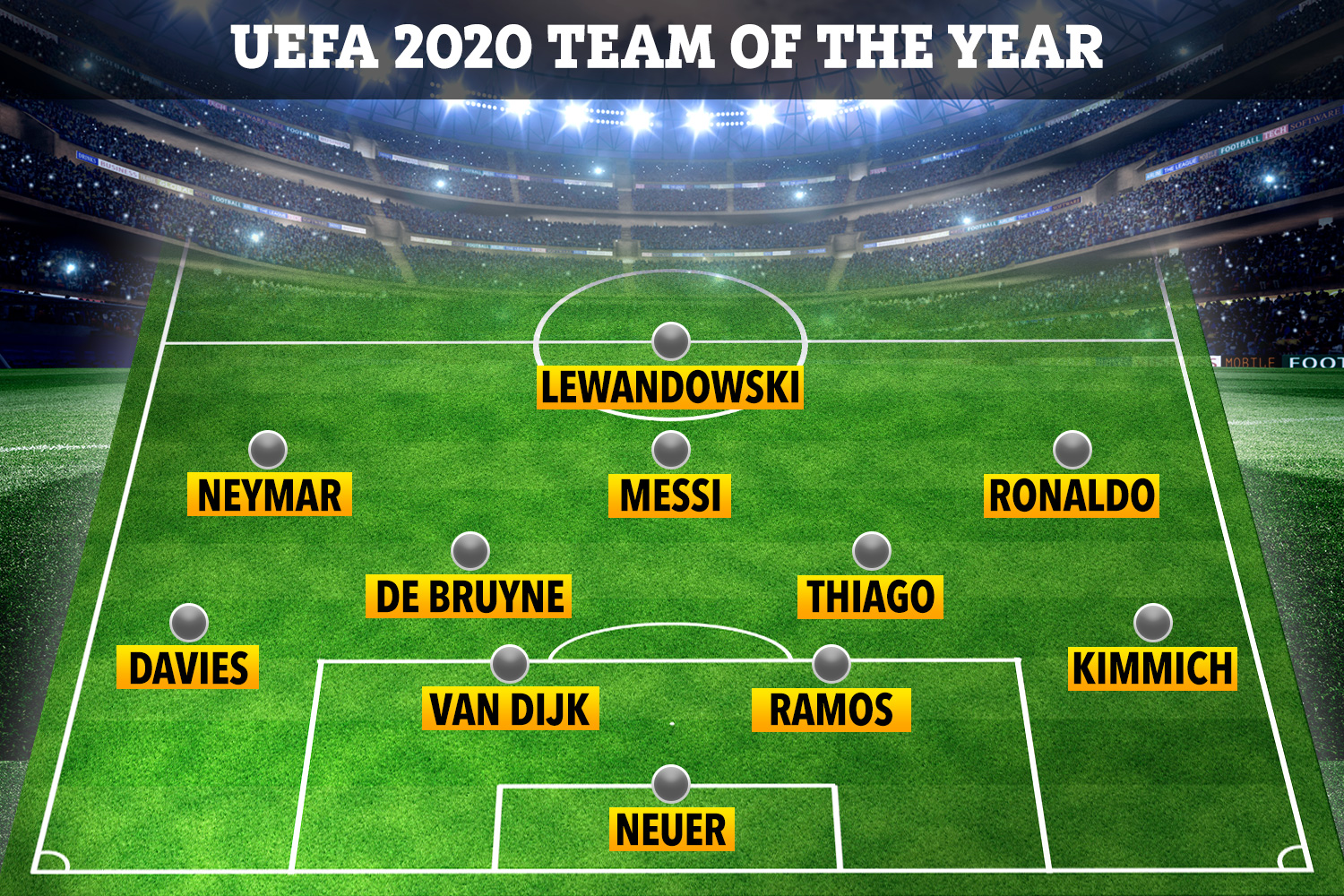